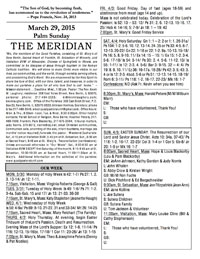 Church of the Visitation of the Blessed Virgin Mary, Alexander, Morgan County, Illinois
Established in 1909

Alexander, a little town of three hundred inhabitants, is situated on the Wabash railroad, twenty-four miles west of Springfield, in the heart of a fertile corn-raising country. Hard road No. 10 passes through it, thus giving easy access to the larger neighboring cities of Springfield and Jacksonville.

The few Catholics in and around Alexander prior to its institution as a separate parish, were first attached to New Berlin and later to Franklin. In the Spring of 1908, the faithful of Alexander petitioned Right Reverend James Ryan, D.D., Bishop of the then Alton Diocese, for permission to erect a church in Alexander. The felt that the journey to Franklin was long and difficult, and they were confident in their ability, as an organized congregation, to build and support a church of their own. These reasons were no doubt the deciding factors in their petitioning the Bishop to establish a separate parish with a resident priest. On being shown good cause, the Bishop granted their request and authorized Reverend William Weigand, then stationed at New Berlin, to organize a new parish and build a suitable church at Alexander.

Work was begun on the new church in 1909, but was temporarily halted by the strong objects of the Franklin people who claimed that the establishment of this new congregation resulted in an unfair and detrimental dismemberment of the Franklin parish. Their objections, however, were finally over-ruled after a careful analysis by the higher authorities, and so work was again resumed and the building completed in early 1910.

January 16, of that same year, Father Weigand said the first Mass in the new edifice now bearing the name the Church of the Visitation. The name Visitation was chosen because it was on the second of July Father Weigand received a letter from Bishop Ryan, appointing him organizer of the new parish and superintendent of the building of the church in Alexander.

During the year 1910 Mass was said every Sunday by the assistants of New Berlin, Reverends Oscar Wernet and Francis A. Lucius. On January 1, 1911, Father Lucius was appointed resident pastor, and took up his residence in the priest’s home which had been built and furnished during 1910. He is still the incumbent.

Bishop Ryan visited the parish on June 30, 1912, to dedicate the church and administer the Sacrament of Confirmation. On that occasion he preached an inspiring sermon which is still remembered by those who heard it.

The church is located in the northeastern part of the village, on ground donated by Joseph Kumle, directly on the hard road, Route No. 10. It is built of brick and well equipped, and has a seating capacity of two hundred fifty. Though large for the original congregation, it is now well filled, as the parish has grown from thirty-five families to over fifty. During the late war, Alexander sent about thirty boys to the service; of these, eleven were Catholics.